Here is what happened in the Las Vegas Real Estate Market for the week of July 21st to July 27th with Brendan from The Brendan King Group @ REAL.

‍This is transcribed (accuracy not guaranteed)

BrendanKing (00:16): This is your market update for July 21stthrough July 27th, so we decided to have a seat here and just kind of chatabout what's going on. There's lots of hype.

BrendanKing (00:31): The sky is falling. You know what? The skyis definitely closer to the ground.

BrendanKing (00:39): Just even for instance this week, we're at16.1 weeks of supply, which in our language means the amount of months it takesto replace based on current sales.

BrendanKing (00:55): So that went from nearly just over threemonths of inventory to four months of inventory. What the heck does that mean?I know we talk realtor talk or real estate talk and people are cross eyed.They're like I don't get what that means. It just means we're ticking more andmore toward a buyer's market.

BrendanKing (01:15): The feeling in my opinion right now is ifyou're a buyer, I think you've got the one up on the seller, to be honest.

JackPalermo (01:33): Because the inventory wasn't there.

BrendanKing (01:34): And there wasn't a price point where thatwasn't the case.

JackPalermo (01:36): Right. Right. But now they have options,so you can kind of shop around and kind of look around and see exactly what youwant.

BrendanKing (02:01): And there's one home under contractcurrently. It's pre-school season.

BrendanKing (02:12): Because it now may be the opportunity to jumpon that, but that's not what we're here to talk about today.

BrendanKing (02:36): So what you can see here is consistentlythis is always the time of year when the market tends to have more inventory.

BrendanKing (02:45): Or more homes come on the market, but thedifference between one week earlier last year and now, the homes only went upby $100, or if not, maybe $80.

BrendanKing (02:56): Right now we're looking at 500 homescoming on the market per week.

BrendanKing (03:31): You know what? We've got happy sellersthat have made a killing in equity in the past two to three years that arestill getting good prices. They're not getting insanity prices, which we were.

BrendanKing (03:45): I've got one house I just recentlyre-listed a little lower than it was before because we had a buyer fallthrough, but it's the story of the market.

JackPalermo (04:25): It's normal. I think maybe for a while youmight see a little bit higher than that, but we're definitely ticking down tothe 0% to 5%.

BrendanKing (04:31): Yeah, and we've seen a few charts and thisone chart has been passed around quite a bit between a lot of agents online.There's a graph that shows areas of the country where things are 100% chance ofbig reductions and a 0% to 25% chance. Vegas is in that 0% to 25% chance.

BrendanKing (05:08): Burned down. So Boise, Idaho, Phoenix,parts of Texas, actually even little blurbs of Texas, not much of Texas. Morethe northwest like Washington.

BrendanKing (05:20): Portland, Oregon. I think people are findingthat those areas of the country are quite a bit away from the rest of thecountry.

BrendanKing (05:28): Unlike ... Only not Phoenix as much butmore Oregon and Washington and Boise. Those three areas in particular arehaving a huge decrease in sales and a big increase in inventory, which meansplummeting prices.

BrendanKing (05:46): Washington was a surprising one to me, butit became a haven for people that wanted to change their area and where theywere, and we'll see what happens with this. But definitely across the board, Ispent three days with some of the brightest minds in real estate last week andthey're seeing the same thing pretty much everywhere. Texas, not as much. Thisgentleman was in Houston. He said, "Hey, we're not seeing it. We're stillhot." North Carolina, still hot. Washington, Phoenix, Boise, like we said.

BrendanKing (06:23): Cooling down. Vegas, cooling down forsure. We're not seeing insanity as far as prices going down like crazy.However, if you're a buyer, you've got some opportunities out there, sodefinitely reach out.

BrendanKing (06:36): Check out the stats. Obviously, we'll postthem down below. We're not going to bore you with every single number thisweek. Really we just wanted to have a candid chat about what we're seeing andwe're seeing supply and inventory going up.

BrendanKing (07:00): Four and a half. So we were at nearly sixa month ago. We saw numbers tick down to four and a half. What that means iswhere interest rates are not when you hear fed is increasing ...

BrendanKing (07:31): And they take that into considerationbased on mortgage rates, and I think we'll probably see ... I don't know,fingers crossed, and just on what I've been talking to a lot of people about, Ithink we'll see a little wave up and down.Jack Palermo (07:47):

BrendanKing (07:47): With mortgage interest rates, barringinflation chilling out, but that'll be a big thing, and supply chains notgetting messed up with monkeypox now.

BrendanKing (08:00): We do need supply chain to open up. Ithink we'll probably see interest rates kind of hover or even tick downward.

BrendanKing (08:16): I think they'll tick downward. Fromtalking to a bunch of mortgage guys, it sounds like that's probably going to bethe case. I hope so.

BrendanKing (08:26): But overall, our average price point is at$541,397 is our average weekly sales price currently. It's a little lower thanwe were.

BrendanKing (08:39): But our year over year is still positive.We always talk about this, if you're at 26% for four years, you're at what?

BrendanKing (09:02): That's still a huge increase year overyear. Either way, hey, reach out to us. If you're on the buy side, there'sdeals to be had. If you're on the sell side, you just have to be smart. Analyzethe market. Don't get behind the market. If the market starts going down aheadof you, then you're just going to chase it downwards. So reach out to myself,Jack, or anybody on the team and we'll absolutely help you figure this out andsteer your way through this crazy storm because I think it's going to be alittle nuts for a little bit.

BrendanKing (09:45): So every week we'll message you theinformation. If you text MARKET to 702-553-1955, or just call us. Hey, we'llchat it with you anytime about the market. Our wives are tired of us talkingabout it, so if there's anybody else that wants to hear about it anytime, giveany of us a call, anybody on the team, but hey, we'll see you guys next week.Have a good one. 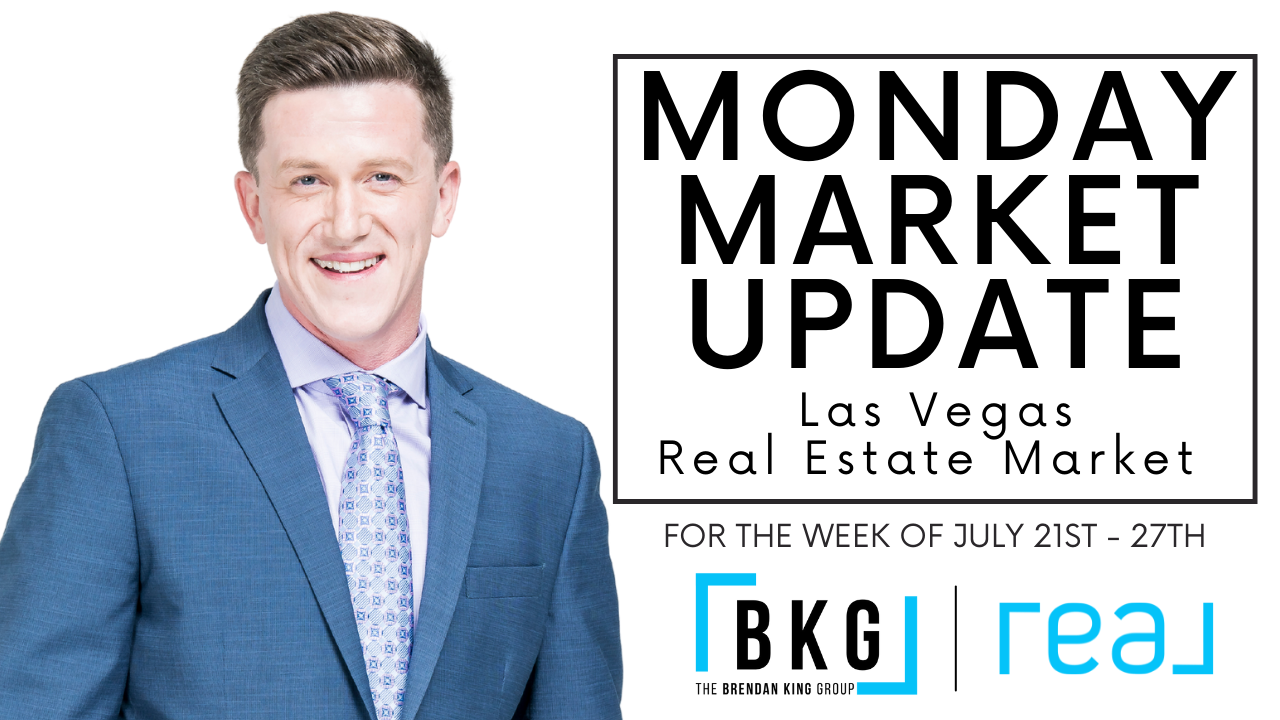 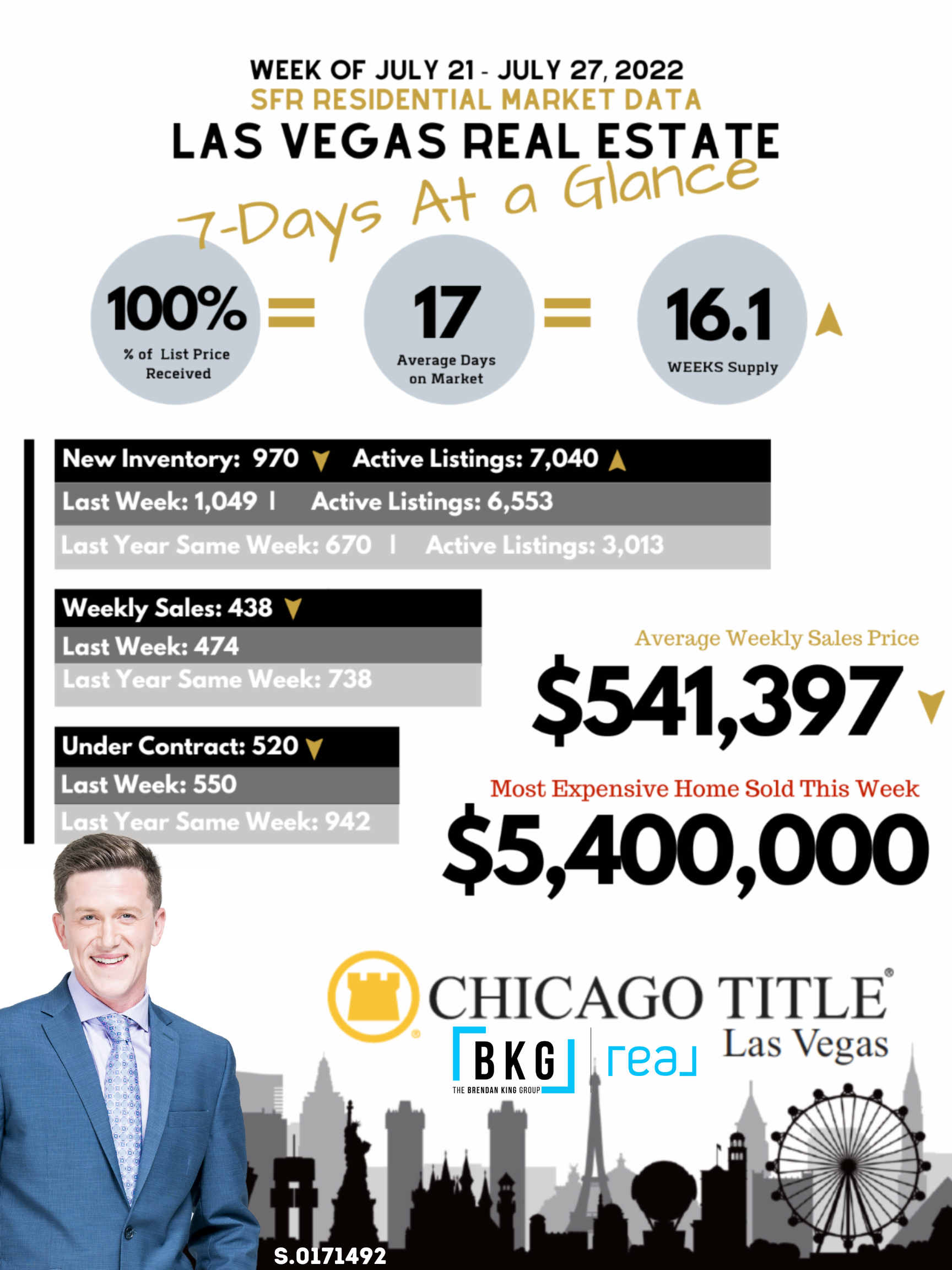