Here is what happened in the Las Vegas Real Estate Market for the week of August 4th to 10th with Brendan from The Brendan King Group @ REAL.

Hey, what's going on? It's Brendan King from the BrendanKing Group @ REAL. This is your market update for August 4th through August10th. Actually, we're going to check out two weeks in a row, July 28th throughthe 3rd, and also August 4th through the 10th. Reason being that things arejust moving so fast that we feel like having a two-week comparison is a littlebetter for everybody than just showing you one week of data.

So July 28th through August 3rd, on average, 100% of list price was stillreceived. And it had been for quite a while with an average days on market ofabout 23, which that's been slowly ticking upward. Weeks of supply last weekwere 14.9 weeks. The big one we're going to look at right now on this one isactive listings at 7,175, and average weekly sale price of $580,499. Those arekind of the main points from July 28th and August 3rd.

Nowlet's check out August 4th through the 10th. Average percent of list pricereceived was 99%. Average days on market, it says they went up, but theyactually went down from 23 to 22 days. The weeks of supply went up from 14.9weeks of supply to 22.6. What does weeks of supply mean? That just means theamount of time it takes to sell the current inventory based on the past week'saverage sales. This is where it gets really interesting.

July28th through August 3rd, the average active listings were 7,175. This weekwe're at 7,443. We've been going up by about an average of about four to sixhundred homes per week on the active listings. But the big thing that changedthis week was weekly sales. Last week, we were at 483 homes. Last year, we wereat 615 homes that same week. This year we're at 330. So when you take intoconsideration from 7,175 to 7,443 as far as total number of listings, and thenyou lower the weekly sales by nearly 150 homes, suddenly weeks of supply jumpsup quite a bit.

The thing is, that's really only based on one week of sales. But it's still apretty solid indicator that there's a lot more homes on the market, and there'sa lot less homes selling on the market. And we see it. We definitely see it. Wefeel it. We see it. Listings of ours right now are looking more like what was18 days, it's probably looking more like 45, 60 days, which I don't even thinkshows accurately just yet because everything in real estate's delayed by 30days. Whatever's happening today technically went under contract 30 days ago.And if you look, average weekly sales price this week was $551,040. Excuse me,last week it was $580,499.

Again,this is a week-by-week snapshot, but that's a pretty hefty change. We're startingto see a pretty good sizeable amount of price reductions on the market. Whatthat's kind of doing is taking off that froth. Before, every time we listed ahouse we were listing 5%, sometimes even 10% above the last comp. You know, onehouse would sell for five, the next one would sell for 550 almost. It was justcraziness. So a lot of that extra froth is getting shaved off the top. And wewent from 26% year over year to 22%, to 19 to 20% year over year. I think we'llstart to see the year-over-year numbers start to trickle down to probablysomething a little closer to normal.

What's normal? That's a question that everybody asks. A normal hundred-year average is about 3 to 4% honestly. That's what we should expect in a normal balanced market. Right now I think we're getting there. We're getting close. We're getting very close to equilibrium where it's the same benefit to a seller as itis to a buyer as far as there are no benefits. It's equally beneficial to both parties. But for now I have to admit, I think buyers have the upper hand.Sellers, a lot of them have 2.5, 3, 3.25% interest rates on their home, so they're not looking to up to a 6% or 5.5% loan and upsize when they have such agreat deal right now.

And then people aren't moving because affordability is squeezed a bit. Not onlyinflation, but also at 5.5% if you live in a $500,000 home, you want to upgradeto a seven, now that's a pretty sizable jump if you have a current mortgage at2.5 or 3. So say somebody who bought their home for 330 10 years ago, now thathome's probably worth 750, and they have a mortgage of 1,900 to 2,000. If thatsame person wants to buy a house for a million, their payment's going to triplenot double because of the fact that it's way, way, way, higher now and interestrates are higher.

So it's interesting. It's an interesting time for sure, and buyers aren't justbuying for the sake of buying because of historic low interest rates. They'rebuying like in normal times because they have to. I just met with a seller theother day, Linda and I, and she's moving because they have some familyscenarios where they have a lot more people in the house than they do rooms, soit's time to upgrade to a larger house. Those types of life moves will alwaysexist and will continue to exist.

On the buy side, you know what? You can get some really great opportunities rightnow. Builders are seeing the fastest increase in inventory that they've everseen in history. What does that mean? That means you could get some closingcosts covered. Maybe you'll get a rate buydown from the builder. Maybe they'rewilling to push your interest rate down by a full 1% or half percent. Thatwould be a rate buydown. Maybe they're willing to contribute toward upgrades.Base prices are actually even starting to come down on builders, whichnotoriously builders will not cut base prices because then everybody else inthe community that just closed starts freaking out and banging on their door.

So they're quicker to let you do a rate buydown or they'll they'll possibly letyou have money toward upgrades. I had one client recently that got $50,000toward upgrades because they'd rather see them put the money toward that thancancel of course. And they just have a lot of inventory right now and theydon't want to sit on it because every day they sit on inventory it costs themmoney. And the more homes that get added, the more inventory, the more it coststhem. So definitely on the buy side you've got opportunities. You've got tohave somebody behind you that's willing to negotiate, willing to go to thetable for you, and go to battle on these types of things.

So definitely you need to not be scared to put the offers in sometimes below listprice. What? We haven't seen that in a while, but we've had a few, a good chunkof clients now getting offers accepted pretty sizeably below their current listprice. And you know what? On the seller side you just have to be careful. Ifyou've built up all this equity the past three or four years, you've still gotthe equity. You just can't go crazy on the list price. We're still gettinglistings sold. We just had one sell at 1.3 million. We sold at 1.25, which is areally great number for that property.

People are out there. They're buying. People still have to move. On the sell side, ifyou need to capture that equity to either upgrade or move that estate, it'sstill a very good time to sell. It's just not insanity. You're not going to geta million offers and you have to price accordingly. You can't price above thelast closing. You've got to be intelligent about the traffic in theneighborhood. How many showings the current listings on the market have. We dothat research before listing always and call the current active listings andsay, "Hey. How's it been? What's going on?"

That'sgood data, good information. We need to be able to price your home accordinglyand intelligently. Either way, if you want this every week by text don't forgetto text Market to 702-553-1955. Text Market to 702-553-1955, and we'll textthis to you every single week. Hey, it's a good time to buy and sell if you doit intelligently and with the right people on your side. On the buy sidethere's some deals to be had. There's some money to definitely utilize to helpyou buy, whether it's closing costs, or rate buydowns, or upgrades with abuilder.

On the sell side, hey, your equity's still there. You can't forget that.Obviously, in order to capture equity you have to sell, but I think thoseinsane number times are gone. So you just have to be smart. Make the place lookgood. You can't just slap it on the market now and get this insane number. Youknow, paint, staging, all these things that we could advise you on to make surethat you still get a great number. But you may not get the insanity number thatwas existing about four months ago. Either way, we'll see you guys next week.Have a good one. 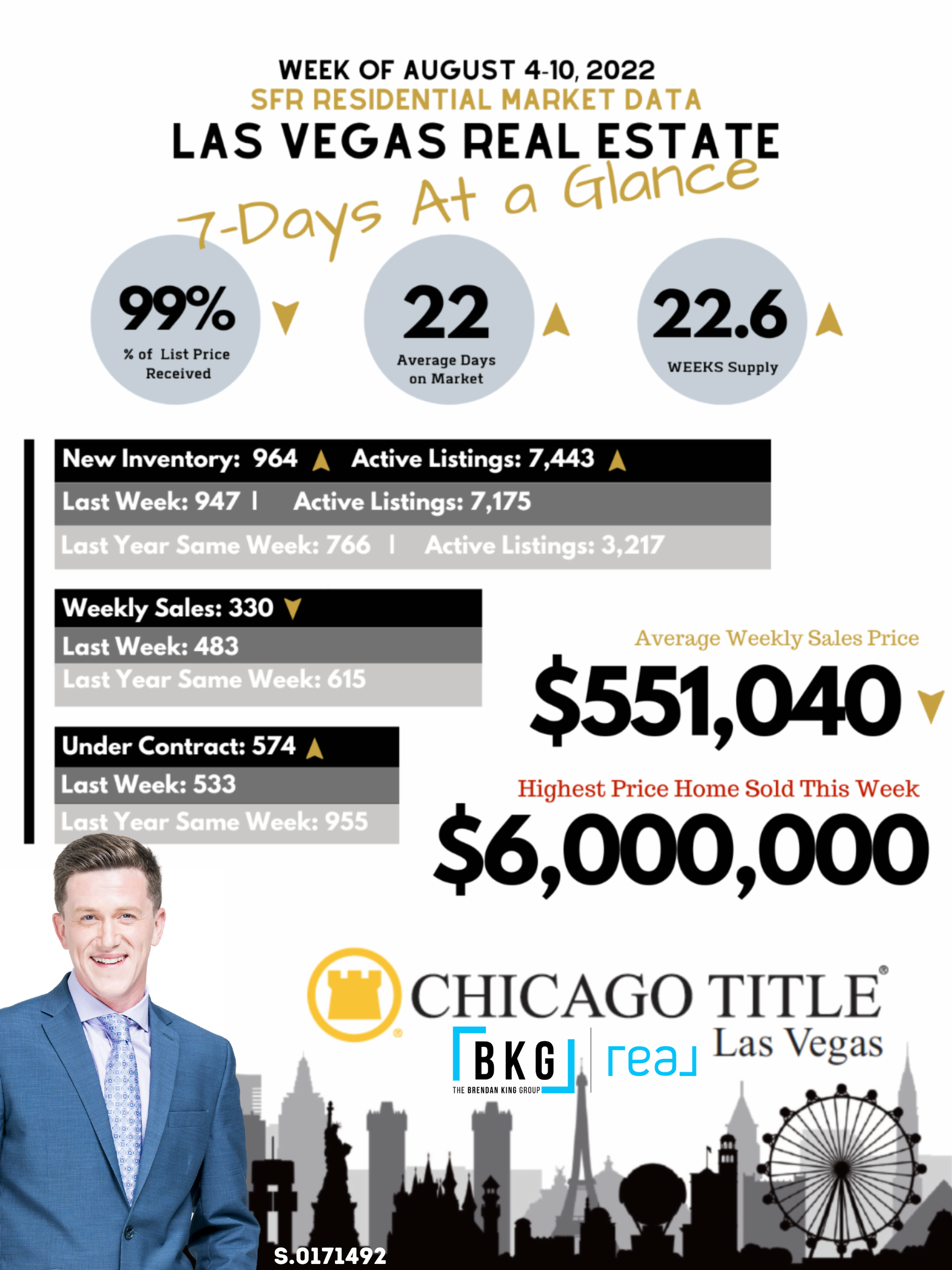 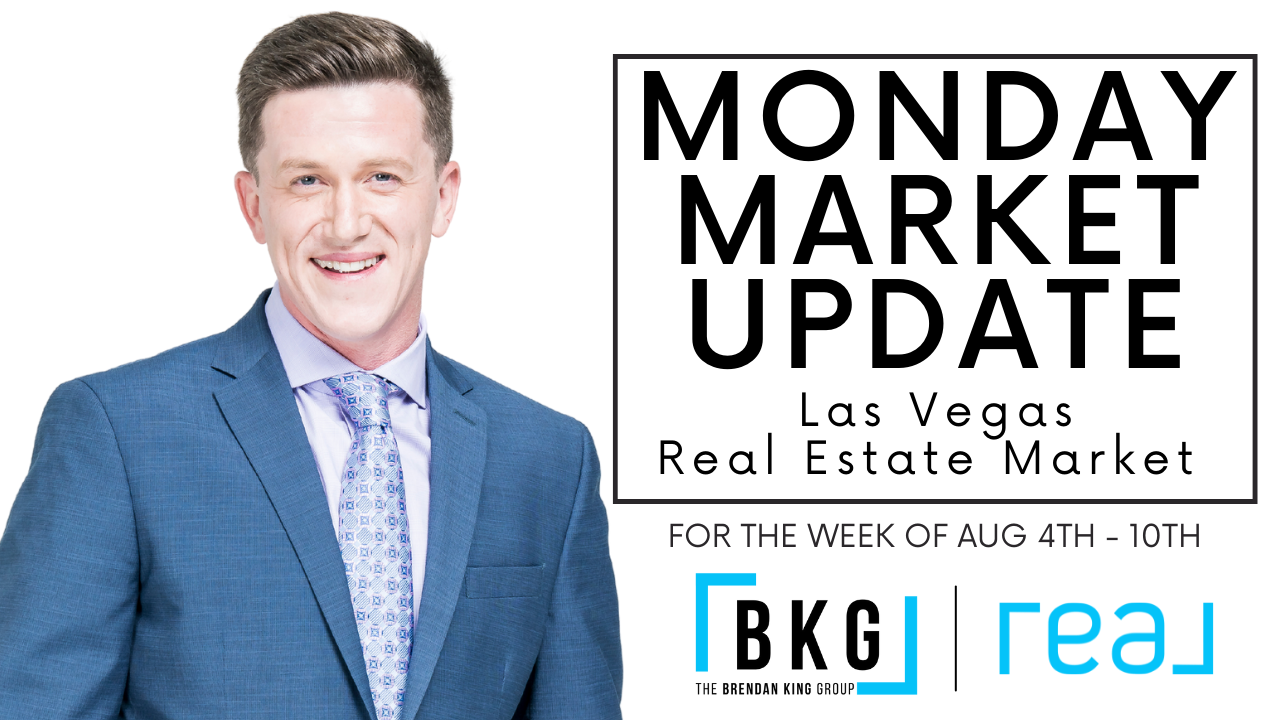