Here is what happened in the Las Vegas Real Estate Market for the week of Aug. 11th to 17th with Brendan from The Brendan King Group @ REAL.

Brendan King (00:07): Hey, what's going on. It'sBrendan King from Brendan King group at Real. And it is your Monday marketupdate for August 11th through August 17th. Let's check it out. So on average,98% of list price was received. Last week, that was at 99. So we're starting tosee that downward pressure show up in the data now.

Likewe said, real estate's a 30 to 60 day period. So data tends to be a laggingindicator or something that happens usually behind the actual reality that'shappening. Average days on market 22 days, which is the same as last week.

Again,one of those funny numbers where I've pulled a 89138 the other day, and homesover a million dollars are averaging about 50 to 60 days on the market rightnow. So it all depends on what price point. Weeks of supply went down this weekfrom 22.6 last week to 18.2 weeks of supply this week.

Whatdoes that mean? So obviously, with 18.2 weeks and it going down, does that meaninventory as far as active listings went down? No, it actually continued to goup, but we just had a little higher sales and a little less homes come on themarket. The school year just started, football starting.

Peopledon't want to leave their house when football starts. But no, to be honest,inventory still, or I should say the listings still went up just not by as muchas it had been the last couple months and weeks. Excuse me. So let's go back tothe data.

Sonew inventory, 879 homes were added to the market compared to 964 last week.Active listings went up again to 7665 homes. Last week, that was at 7443 homesthat were active listing. So we went up a little over 200 homes. Last year, forperspective, we were at 3217.

Sowe've one and a half times the inventory pretty easily. Weekly sales, 421 homessold last week, or I should say last week compared to the week before of 330.And under contract, 599 homes. Just a little more than the prior week of 574.The average weekly sales price was $519,244.

Andthe most expensive home sold was 3.4 million dollars. What's going on? Itdepends on the price point, it depends on the area of town. We're definitelyshifting and have shifted for a little bit now. And now it's just being a...It's a little more apparent.

On alot of reports now you see it no longer says seller's market, it says neutral.And in some price points, it's a buyer's market. If you're a buyer right now,you've got choices. You had one choice for two years, now you've got sevenchoices, eight choices. So on a buyer's side, you've got some opportunity here.

Youcould ask for closing costs. You could absolutely be a little more aggressiveon price when you put in an offer. That's definitely something you can do rightnow as a buyer. It's a different world. Before you had no choice, whatever onehome was on the market, that's what you're stuck with and you had to fight 20people to get it.

Nowit's tides have turned and you've got the ability now to put in a little loweroffer on some homes and be the only offer and ask for closing costs. So wow,how things change. And you hear about it all the time, things change fast. Andit's the same in the stock market as it is in the housing market.

Imean, same square footage, same zip code, same everything. You have new homesin some areas selling for less than resale. Why is that? Builders are quickerto get rid of inventory than sellers who are emotional. A builder looks atdata, they see what's coming and they act accordingly. So some builders rightnow are acting accordingly.

They'regetting rid of inventory as fast as they can and resetting themselves. So onthe builder side and on the new home side, you've got some really good chancesfor great prices, money toward upgrades, possible closing costs, maybe aninterest rate buy down.

Whatdoes that mean? An interest rate buy down means in this case, the builderpossibly you could ask for them to pay down your interest rate by half percent,three quarters of a percent. Some of them are just offering it without youasking.

Samewith sellers, I just saw a seller, $10,000 buy down we got at one of ourbuyers. They wanted to offer closing costs, our client wanted a interest ratebuy down. And that's something you have to discuss with your lender. That's notalways the best choice, depending on your price point and your affordability.

Ifyou can afford the higher interest rate, it may be better to take that cash inclosing costs or a reduced price because you could always refi down the road.Carly, on our team mentioned something the other day, you marry the house, butyou date the interest rate.

Ithought that was hilarious and a very good way to say it. So in some chances orsituations, maybe marrying the house and dating the interest rate is the betterchoice. And in other situations, actually buying down the interest rate may bethe better choice if you can't afford the home, unless you do that.

Becauseaffordability's important. You don't want to say, "Ah, I'll just get thehouse," and then pay a price that you can't technically afford. You wantto be able to afford it. So it's just some advice from my end of what I'mseeing. But you know what? We're definitely seeing change.

There'sdefinitely change, the change is here. The change is passed already. On theseller side, think about the last 10 years. If you've been in your house for 10years, every single year you've made money. So this little change in the marketdoesn't mean you're not going to make money.

Itdoesn't reset you to 2012 or 13. It puts you in a situation where are you goingto get a little less than you did three months ago? Absolutely. But are youstill going to get a ton of equity and maybe on the buy side, be a little moreaggressive"

Youmay be able to make up the difference on the home you're buying for what youwould've made on the selling side. So I wouldn't be too nervous about that end.You're still going to sell, you just need to be intelligent about your pricing.You're not going to get probably what the last seller got in your neighborhood.But that's our job.

Wecan analyze the scenario, analyze the situation and help you make thatdetermination as to what you should do and where you're going and how much youshould pay on the new neighborhood. Don't forget, as always, you can textMarket to 702-553-1955. You can get on our list. We'll send you the reportevery week or two weeks.

Itdepends. Lately, we've been waiting for two reports in a row just becausethings were changing so fast. We wanted to do some, a comparative analysisbetween the two weeks. But definitely get on the list. We'll text you eitherway. We'll let you know what's going on. And as always, we'll see you nexttime. Have a good one. 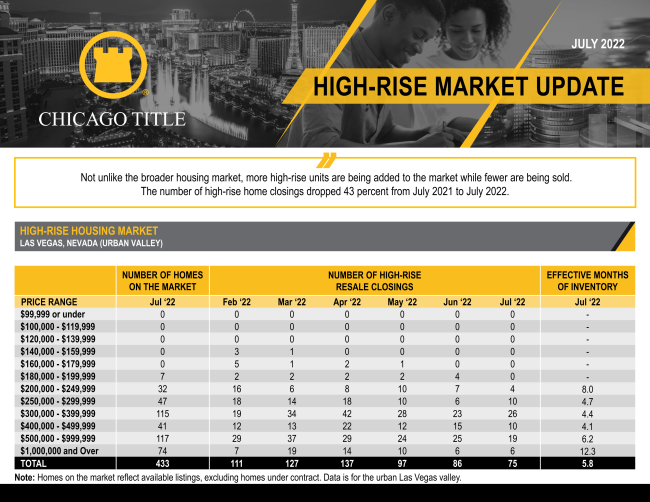 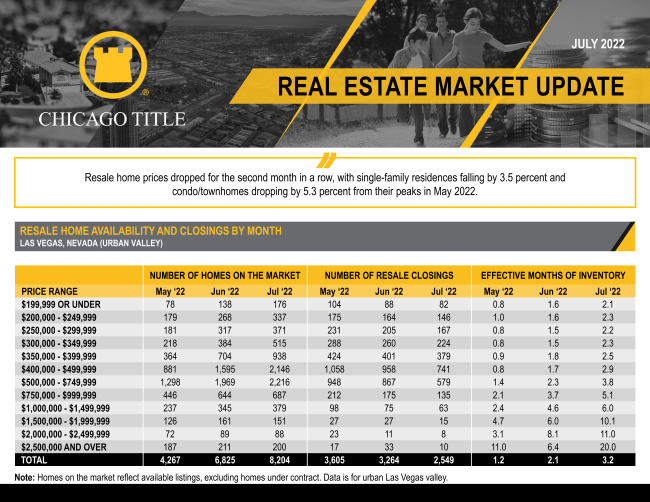 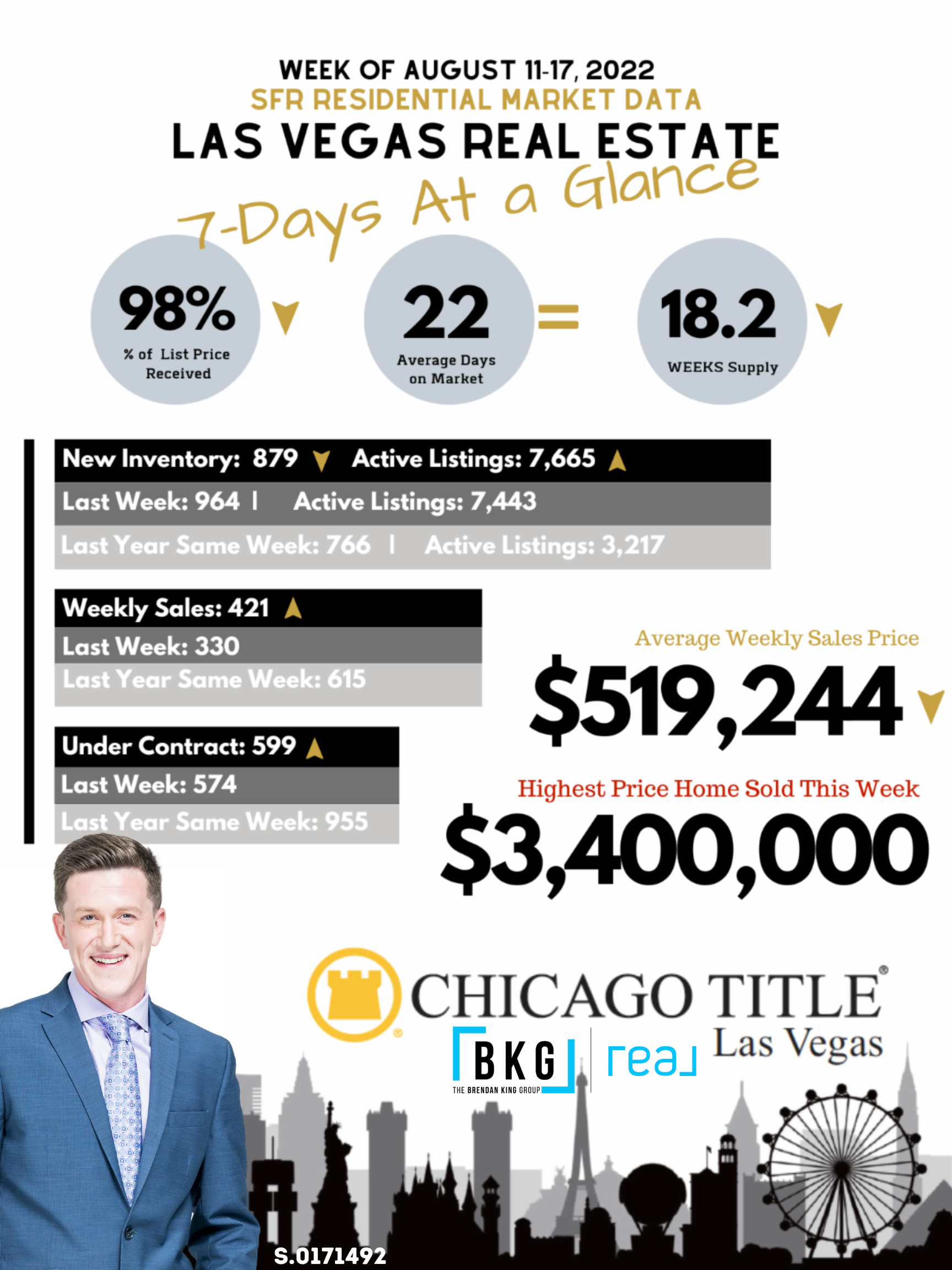